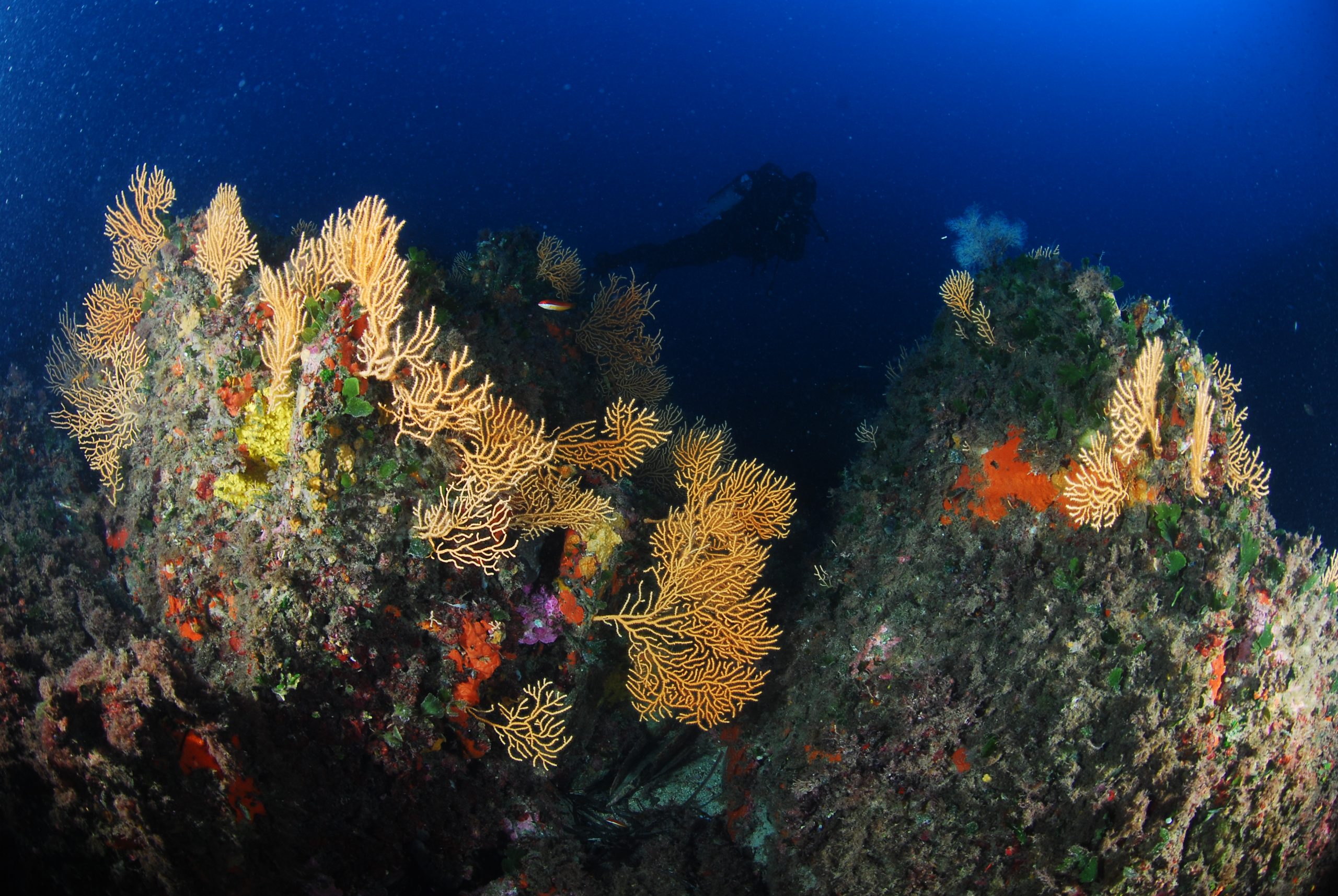 Il coralligenous is defined as "a typical Mediterranean underwater landscape formed by coral algal structures that grow in low light conditions and in relatively calm waters"(Ballesteros 2006; UNEP / MAP-RAC / SPA 2008). We therefore find it only in the Mediterranean Sea, generally between 25 and 200 m deep, in typical and very particular environmental conditions, i.e. where the waters are clear, poorly lit, fresh and at a constant temperature and affected by mild currents.

The coralligenous is a habitat that takes shape thanks to a process of "bioconstruction" by plant and animal organisms that with their calcareous skeletons build complex and colorful three-dimensional structures similar to tropical coral reefs, giving life to one of the most fascinating spectacles of the underwater world, beloved by divers and a refuge for many important species. Calcareous red algae (Rhodophyta) belonging to the order of the Corallinales (Mesophyllum spp., lithophyllum spp. And Negoniolithon spp.) are the main builders of coralligenous and are defined as "primary bioconstructors": they grow layer by layer on the rocky seabed creating with their calcareous thalli a secondary hard substrate on which other red algae settle (Peyssonnelia spp.) and various species of animal organisms (mainly polychaetes, scleractinias and bryozoans).

The growth of these and other animal organisms, called "secondary bioconstructors", expands and consolidates the three-dimensional structure, increasing the number of refuge microhabitats for a very high number of species: for this reason, limestone bioconstructions can be considered real cathedrals submerged in biodiversity.

The growth of limestone bioconstructions is counterbalanced over time by chemical and mechanical demolition phenomena by "biodemolishing" organisms (mainly sponges and molluscs respectively belonging to the genera cliona e Lithophaga), which pierce, crumble and dissolve the calcium carbonate. The delicate balance between bioconstructing organisms and biodemolitioners keeps the coralligenous alive and vital over time, but also makes it particularly vulnerable to environmental alterations: these can break the dynamic balance between bioconstruction and biodemolition activities, with consequent prevalence of demolition processes and degradation of limestone bioconstructions

The morphology and structure of the coralligenous mainly depend on the depth, the topography and the bioconstructive species present. Many types of coralligenous have been described, but the most widely used definition is that which distinguishes coralligenous on a geomorphological basis between reefs or cornices and platforms or shoals (Pérès & Picard 1964; Ballesteros, 2006; SPA / RAC-UN Environment / MAP, 2019 ).

The coral reefs they develop on rocky substrates around the coast, mostly between 30 and 90 m deep, but in particular conditions of turbidity, currents, exposure and slope of the seabed, they can be found between 15 and 130 m. They are divided into two main formations: the coralligenous wall or cliff, which develops on a vertical or sub-vertical rocky substrate with bioconcretions of variable thickness (from 20 cm to 2m), and Clumps biogenic that develop bioconcretions up to several meters thick on horizontal bedrock (EUNIS, 2019).

The coral platforms they are large tabular bioconstructions that develop on the more or less horizontal substrates of the continental shelf, mostly between 40 and 120 m deep. We therefore find them on bottoms of sedimentary origin and can develop from the coalescence of rhodolites or grow on rocky outcrops.

Although both types of coralligenous can be found in a broad range bathymetric, in the first 40 / 50m depth the coastal rock systems are mainly characterized by coral reefs while the coral reefs are generally found in the deeper environments of the continental shelf (Ballesteros, 2006; Cánovas-Molina et al. 2016). Due to its proximity to the coast, the wall coralligenous is therefore the one most exposed to the anthropic pressures that act along the coastal strip, such as chemical-biological pollution, excess sedimentation, tourist and commercial activities and suffers particularly from all those environmental alterations affecting the more superficial bathymetric bands, such as eg. climate change. On the other hand, shelf coralligenous is particularly exposed to pressures that act at greater depths, such as the accumulation of solid waste and trawling.

Coralligenous is considered the second most important "hot spot" of Mediterranean marine biodiversity, after the meadows of Oceanic Posidonia (Bouderesque, 2004). However, in the absence of a precise estimate of the number of species present and considering the structural complexity of its populations, it is believed that the coral habitat hosts more species than any other Mediterranean community (Ballesteros, 2006).

Coralligenous is also one of the most important coastal ecosystems of the Mediterranean Sea for distribution, biomass and role in the carbon cycle (Ballesteros 2006), but in addition to its great ecological value, it also represents an important economic resource due to the presence of valuable commercial species such as red coral and various species of fish and crustaceans (eg lobster and lobster) and for the enormous attraction exercised on underwater tourism.

Due to its unique characteristics, coralligenous is also one of the most threatened habitats in the Mediterranean, which is why European legislation has been committed over the years to its conservation and protection by issuing important European directives (Habitat Directive 42/53 / EEC and Framework Directive Marine Strategy 2008/56 / EC), but also international treaties such as the Barcelona Convention (1976) play an important role in the protection and safeguarding of this precious and unique asset of the Mare Nostrum.